For this post, consider a few selections from Watts’s favorite son, Charles Mingus: Fables of Faubus and Moanin’

This week marked the 50th anniversary of the Watts riots, a week-long struggle between the predominantly African-American residents of Watts and other Los Angeles neighborhoods, a police force made up of thousands of state, local, and county officers, and the California National Guard. The significance of the half-century anniversary is marked the many great retrospective articles appearing in the media. Some reflect on the disappointing similarities with Ferguson, perhaps demonstrating that much remains the same. Others touch on the personal and political legacy of Watts.

What is perhaps lost on many people is that the 50th anniversary means that Watts – or at least its associated built and natural environment – finds itself qualified for the National Register of Historic Places. The National Register is a sanctioned list of historic properties commemorated for their contribution to the nation’s history. Typically, only properties older than 50 years make the cut, unless they have “exceptional significance.” Aside from individual buildings, there are also historic districts on the Register, covering acres or city blocks, a designation likely more appropriate for Watts.*

It is contentious and difficult to define “Watts,” a week of violence in LA ignited during a traffic stop and extinguished by a smothering blanket of National Guardsmen. History remembers Watts for its rioting, looting, and arson, while others, including the civil rights leader Bayard Rustin, remember it as “the first major rebellion of Negroes…carried on with the express purpose of asserting that they would no longer quietly submit to the deprivation of slum life.” Much of the recent coverage of Watts 50 years later still struggles with this question, just as the country wrestles over the meaning of #BlackLivesMatter and associated acts of resistance. 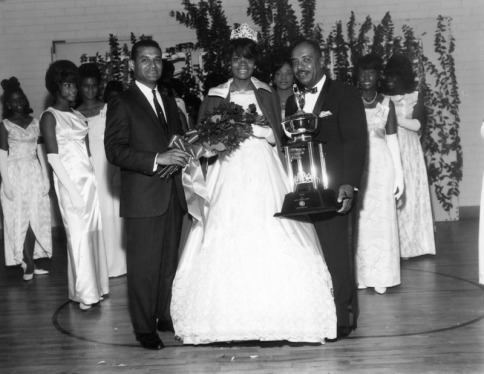 Archaeology provides a new and unorthodox framework through which to view Watts and its historical legacy, and other events like it. Archaeology is traditionally associated with excavating artifacts from the ancient past and cloistered scholars toiling over thousands of indistinguishable sherds. But really, archaeology in its most distilled form boils down to the study of people and their stuff. The things, or material culture, that make up our everyday lives are artifacts, too—objects made, modified, or manipulated by humans. This includes everything from the buttons on your shirt to the structures and highways of the Los Angeles landscape. Artifacts are the things you select and curate to construct your identity and they are the things that other people, right or wrong, associate with you and those of your class. They provide a social lubricant and common ground and they build the physical and symbolic walls that confine and divide. Archaeologists study material culture within a context, taking into consideration the history, politics, economics, and culture in which these artifacts operate. For a historic moment like Watts, archaeology provides a unique way to understand how history and material culture figured into the construction, culmination, and ripples of the event.

Watts was just one of many confrontations in the 1960s that found a group of citizens facing off against an increasingly militarized police force and the National Guard. Recent critiques of law enforcement in American cities blame the rising use of military tactical strategy and military surplus as a wedge between municipal governments and city residents, exacerbating the already contentious relationship between police and neighbors. This phenomenon is not limited to Watts: National Guardsmen were key players at Selma and Ferguson (with very different outcomes). Before the Civil Rights movement, Pinkertons, state militias, and the National Guard broke the labor strikes of the late 19th and early 20th centuries. The nature of the conflict between these groups and the material culture featured in the struggle (firearms and improvised incendiaries, strategic gathering points, armored vehicles and gas masks, etc.) is not too different from an actual war.

The National Park Service grants somewhere around a million dollars each year through the American Battlefield Protection Program (ABPP), which funds the study and preservation of sites associated with armed conflict in the United States. Specifically, the act enabling the ABPP seeks “to assist…in planning, interpreting, and protecting sites where historic battles were fought on American soil during the armed conflicts that shaped the growth and development of the United States, in order that present and future generations may learn and gain inspiration from the ground where Americans made their ultimate sacrifice (emphasis mine).” Over the years, projects funded through the ABPP have contributed to our understanding of military efforts by colonial and federal governments to relocate and suppress Native Americans. These were events that undoubtedly shaped our country, for better or worse, and Americans—Native, European, and African—all made the ultimate sacrifice over centuries of conflict. The ABPP also encourages public involvement in these projects, which provides an opportunity for the education and inspiration laid out in the program’s mission.

Many ABPP grant projects use a method known as KOCOA military terrain analysis. This acronymic technique is used by military tacticians to assess a battlefield and plan accordingly by identifying Key Terrain, Observation and Fields of Fire, Cover and Concealment, Obstacles, and Avenues of Approach and Retreat. These principles, while codified by modern military thinkers into a tidy acronym, are basic tenets of conflict regardless of the time period. The ABPP also encourages grantees to place the event into historical and geographic context. The geographic context of a conflict landscape includes all those big pieces of material culture—the buildings, the roads and bridges, the constructed and natural landscape features—that influenced the battle. The historic context places a short event at the center of a long timeline, showing how the participants got to this momentous point as well as how the battle shaped events and relations afterwards, including how people remember the conflict and talk about it years later.

While it is not a traditional battlefield, the Watts riots have all the right ingredients for this sort of archaeological analysis. The event is ripe with history leading up to August 1965, stemming from the Second Great Migration, real estate red-lining, and local and state governments reacting to the swiftly evolving demography of Los Angeles. Much of the geographic context of the riots is still in place, despite over a thousand properties burning to the ground, many never rebuilt. Many of the participants, on both side of the baton and riot shield, are still alive, providing a wealth of witnesses to those events. Maps assembled for recent articles compare the curfew limits, destroyed properties, and a timeline of events, all generated using GIS software, a common tool for the modern archaeologist. These maps serve as a foundation for identifying the key features, obstacles, and areas of concealment and cover, the elements of KOCOA. And, in this case, the avenues of approach and retreat, for both the citizens and the police, were actual avenues.

While the Watts rebellion meets the National Register’s criteria, the skirmishes between the police, the National Guard, and Los Angelenos are not eligible for ABPP funding for archaeological research. The ABPP has supported the study and preservation of battlefields associated with many lopsided battles in American history, but sites like Watts, Selma, and Kent State do not make the cut, regardless of the use of militarized force and the applicability of KOCOA analysis. This point is not meant as a critique of the ABPP and the great work the program supports. However, if we allow ourselves to expand the definition of armed conflict in order to support new perspectives on issues like racial and political violence that still effect a supposedly post-racial society, we may find an unexpected public benefit. If the goal of the ABPP is to honor those who gave the ultimate sacrifice, the 34 people who died during a week of fighting in Los Angeles surpasses the number of casualties of some of the battles researched through ABPP grants. The public memorials to the Watts rebellion clearly show that descendants of that community are still learning and gaining inspiration from that fight and see the unassailable historic connections. Archaeology is an evolving discipline, and innovative scholars are pushing at the boundaries of traditional archaeological inquiry to make more meaningful contributions to social issues and community heritage. An archaeological analysis of Watts through this conflict framework may not seem like traditional archaeology, but the historic episode meets the criteria. There is a trove of material culture and history tangled in the events and policies that led up to the riots. Some of those artifacts shaped the culmination of the riots and survived the fires to create their own legacy of Watts.

Earlier in August, another similar incident observed its first anniversary. The 2014 shooting of Michael Brown in Ferguson, Missouri, and the ensuing conflict between citizens, local law enforcement, and the Missouri National Guard have a long way to go before becoming eligible for National Register status. But, the material culture legacy is already clear. Besides their digital hashtags, #BlackLivesMatter and #HandsUpDontShoot have made a mark on a number of objects in the physical world: from semi-permanent murals in cities across America to ephemeral posters and protest signs. On the other side, the body cameras mandated by many police departments soon after the shooting create a sort of cultural horizon, a dating term used by archaeologists to denote a noticeable proliferation of a style or technology across a broad area. Even on a much smaller scale, examining the direct effects of the shooting and its immediate, more intimate, results, we can see the roadside memorial on Canfield Drive and the milled patch of pavement where Michael Brown’s body lay as potential archaeological features. It is still archaeology, the study of people and their stuff, contributing to our knowledge of how we got to where we are and how we will remember where we were. And we may not need the National Register to accomplish that.

*A search for National Register-listed properties in the Watts neighborhood found only two buildings (neither of which was Charles Mingus’s house). One of the listed buildings is the Watts Station, a trolley station built in 1904 and listed in 1974, which survived fires that burned nearly every building on a mile-long stretch of 103rd Street. Just months after Watts, the city’s Cultural Heritage Board recognized the building as a historic cultural monument, seemingly by virtue of being the only thing to persist. Carl Dentzel, vice president of the board, said, “This indication of community interest in the beautification of the area will be an extension of the wonderful work accomplished by Watts in its ‘Operation Tea Cup’ campaign last May. This constructive effort has, unfortunately, been completely unrecognized because of later incidents (emphasis you-know-whose).”